Brexit Negotiations, Europol And The Fear Of Missing Big Data

Yesterday, the Brexit negotiations started and they are as populistic as we already would expect it from UK’s new leader Theresa May—in the end she lurked to the EU that she would exit from Europol as well if negotiations are not reaching an acceptable agreement for them.

As observable already in the past few months, the British leadership is aiming to obey existing rules for an exit of a member state of the European Union by pressuring the remaining states.

It is understandable that the UK wants a new lucrative trade deal already during the negotiations of the exit; The chances to get a better deal while being in the EU is significantly better than directly after the exit negotiations.

Secondly, if a new trade deal would only be discussed afterwards, this would increase the chance that there would be a timeframe without any trade deal, causing a heavy impact on all UK businesses and its citizens due to much increased prices for imported goods and a decrease of exported goods due to missing commercial trade advantages (taxes, regulations). 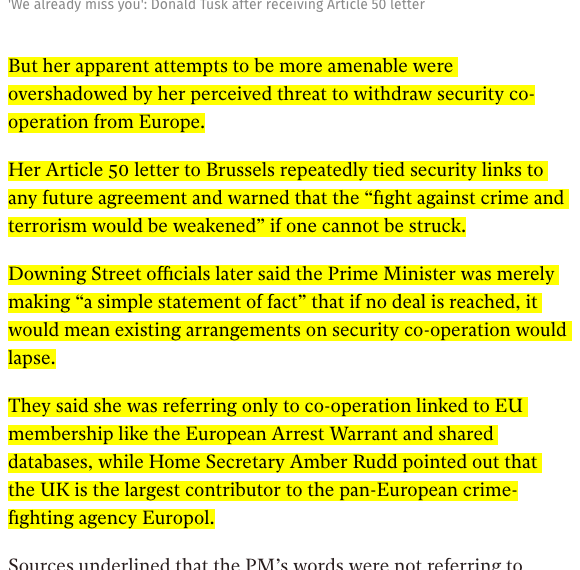 In times where more people live in fear of potential terror attacks than probably ever before in western Europe, Theresa May used an interesting strategy trying aiming to thread the EU and teased to cancel the membership of the UK at Europol, the European Police Office, that handles criminal intelligence and combats international organised crime. This institution is an important part of the security concept of Europe and has been a mostly successful concept so far. The exit of the UK would mean that one of the Five Eyes alliance partners would stop sharing data with Europol.

From a privacy-view the exit of the UK from Europol would not be a huge loss. The British intelligence services have played a big role of unsubstantiated mass-spying on European citizens and sharing this data with world-wide agencies.

On the other hand losing an intelligence partner is a huge loss for an institution that relies on external partners’ research, data. Europol needs cooperative members to be efficient by the pretty formalised definition of how they can operate. The loss of one of the biggest partners would certainly have an impact on the institution.

The European Union however decided to deal with the various threads of May with a solid, strong and unified reply: The EU refuses to be blackmailed and instead will, as requested by the UK’s leadership, follow a hard, proper exit of the member state.

Populistic voices claim that losing one of the Five-Eyes would have a huge impact on European peoples’ safety. But while losing a big partner will have an impact on how intelligence parties work today, it only means one thing: Intelligence agencies and authorities like Europol need to focus on their core business again. Instead of grabbing mass data from random citizens of the Union that they aren’t able to process, they need to focus on specific targets and use only the data that they can deal with to get more efficient again.

What currently happens in Western Europe is the spread of fear through governments, intelligence and police agencies, newspapers and some politicians. The claim for broader mass-surveillance is a constant one and has an ever growing impact on the remaining privacy of honest and law-abiding citizens. Since Edward Snowden leaked a lot of internals from various world-wide intelligence agencies we know that they are not able to deal with the already existing amount of data which is why they as well have big hopes for Artificial Intelligence. More data at the moment would mean even less efficiency because the more data one has to search a threat in, the harder it gets. We all know that from our own daily work and it is no different for the people and Computer working for authorities.

Big data is not always the best choice and as proven in many cases, less data can make people and therefore institutions more efficient—which in this case could resolve in more reliable intelligence with better privacy protection of harmless citizens.
Populism and its broad claims do not mean you can do whatever you wish to do. Who knows what would have happened if UK’s leadership hadn’t enforced a hard exit from the EU, but it is only reasonable that now the European states will, as requested, stay hard and follow the European laws for the process.